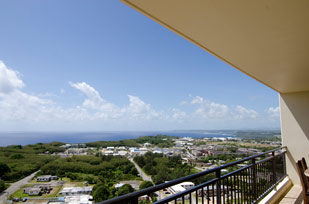 Ladera Tower’s central location puts you just minutes from almost any destination: 15 minutes to the airport, less than 20 minutes away from the Tumon Entertainment district, 11.3 miles to the back gate at Andersen AFB, and 13.3 miles from the Naval Base at Apra Harbor. From Ladera Tower, you are also only 3 minutes away from Guam’s grocery giant, Payless Supermarkets, University Guam, Guam Community College, Coffee Shops, Subway, and more. Plus, Hagatna (Guam’s Capitol) is an easy 15 minute drive away. Ofcourse, Tumon (Guam’s restaurant and nightlife hub), Malls, and shopping outlets are also only a 15 minute drive away. For the golfer in you, you have a direct access to Guam’s Championship Golf Course, Mangilao Golf Club, just literally a minute away from Ladera Tower.

Located on the cliff-line in the beautiful, serene village (city) of Mangilao, Guam, Ladera Tower boasts excellent views from all angles. Each Ladera Tower unit includes a private balcony so you can enjoy the stars at night or a cup of coffee in the morning, while soaking in the fresh air, from your very own condo. Units also offer ocean views.

Origin of village name in Chamorro

Mangilao derives its name from the word ilao, which means to look for something. In the past, hunters and fishermen would go to Mangilao to search for crabs, deer, wild pigs, and fish.

According to the U.S. Census, there were approximately 13,313 people living in Mangilao in 2000.

The current mayor is Nonito “Nito” Castro Blas who first came into office in 1988. Alan “Al” R.G. Ungacta is the Vice Mayor.

The village of Mangilao is located in central Guam. It lies between the villages of Barrigada and Chalan Pago. The village also branches off into subdivisions bordering Dededo and Yigo. These subdivisions include Latte Heights, Latte Plantation, Sunrise Villa, Banyan Heights, and lower and upper Pagat. The village has been called “Guam’s capital of education” because both the University of Guam and the Guam Community College are located there.

Captain H.B. Price Elementary School
More commonly known by the shorter name of Price Elementary School, this school is part of the Guam Public School System and houses grades Kindergarten through grade five. The school was opened in 1958. It was named after Price who was a former naval governor of the island in the 1920s who pushed for agricultural development in the area at the time.

Father Duenas Memorial High School
Better known as FD, Father Duenas Memorial High School is Guam’s only all-male Catholic high school. In 1948, Guam Bishop Apollinaris Baumgartner began this Catholic minor seminary and high school named in the priest’s honor at Ta’i. It is near this site that Father Jesus B. Duenas was murdered by Japanese soldiers near the end of World War II.

George Washington High School
Commonly referred to as G.W., this high school is one of four high schools within the Guam Public School System. G.W. was established in 1936 in Hagåtña (to replace the Seaton Schroeder Junior High School) and is the oldest public high school on Guam. Its first graduating class was in 1940. In 1945 it was moved from the capital to Sinajana and then to Mongmong in 1952. It was rebuilt in Mangilao in 1965 and remains in this present location.

Guam Community College
Initially established as Guam Vocational Technical High School, Guam Community College—a public vocational educational institution—was created in 1977 by Public Law 14-77. The legislation was aimed at strengthening and consolidating vocational education on the island. GCC has offered secondary and post-secondary vocational programs, adult and continuing education, community education, and short-term specialized training programs. An Act of Congress in 1946 and 1963 and subsequent amendments designated the college as the State Board of Control for vocational education. Today GCC offers more than fifty courses of study that are job related. Additionally, the college offers courses of study to prepare its students to transfer to four-year colleges and universities.

KGTF-TV Public Television Station
KGTF-TV, Guam’s first and only public broadcasting television station, went on the air for the first time on October 30, 1970. The station was initially funded by a federal grant from the Department of Health, Education and Welfare and the Government of Guam. KGTF established its offices, tower, and transmitter in Mangilao where it continues to operate today. An executive order created the Guam Telecommunications Commission, which enables KGTF to be licensed from the Federal Communications Commission. In 1974 the 12th Guam Legislature made a public law to create a nonprofit, public corporation to operate KGTF creating the Guam Education Telecommunications Corporation.
KGTF works closely with Guam’s educational institutions and the local government to raise the standards in education providing outreach activities, workshops, and training sessions to parents, caregivers, and educators of young children.

Pacific Bible College
Established in 1991 on Guam, this educational institution offers Associate of Arts (AA) degrees, and a Bachelor of Arts (BA) degrees with focus on Christian and Biblical studies.

Sanctuary, Inc.
Sanctuary is a non-profit organization established more than thirty years ago to help the island’s troubled youth. Sanctuary has since expanded and its programs provide the community with invaluable programs and assistance for youth, families and the entire community.

Santa Teresita Church
Mangilao’s Catholic church, established in 1951, was redesigned from its former Spanish missionary style to its new architectural design and rebuilt on a lot adjacent to the former church building after being destroyed by Supertyphoon Pongsona in December 2002.

Sisters of Mercy Convent
The Mercy convent opened in 1951 in Tai, Mangilao as a second convent to accommodate the growing number of sisters and novices. The first convent was in the capital city of Hagåtña.

United Methodist Church
Methodist church members received a loan from the United Methodist Development fund in 1996 to build this church on Route 15 in Mangilao. The congregation was initiated on Guam in 1971.

University of Guam
In June 1952 the Government of Guam established the Territorial College of Guam as a two-year teacher training school in the village of Mongmong under the Department of Education. In 1960 the college moved to its present location along the cliffline in Mangilao and by that time had expanded the academic programs, faculty and staff to meet the needs of increasing enrollment. Administrative control over the college was transferred in 1963 from the Department of Education to a five-member Board of Regents.

The college was accredited as a four-year, degree granting institution that same year and again in 1965. After gaining the maximum five-year accreditation period, the college was renamed the University of Guam by an act of the Guam Legislature. An Act of the United States Congress on June 22, 1972 designated the university as a land-grant institution. The university later gained Administrative Autonomy with the enactment of Public Law 13-194, “The Higher Education Act” in 1976 establishing it as a non-membership, non-profit corporation under the control of a nine-member Board of Regents appointed by the Governor of Guam with the advice and consent of the Legislature. The University of Guam is recognized today as the major institution of higher learning in the Western Pacific.

Eagle Field
This recreational and sports field is located along Route 15. It was recently renovated for youth football leagues. Private skydiving companies also use the area as a landing site.

Onward Mangilao Golf Club
This Mangilao golf course is located on the central eastern coastline of Guam. It offers 6,904 yards of scenic landscape for each of its 18-golf holes. It was originally opened in April 1992.

Thousand Steps
This set of concrete steps, which actually number closer to 150 very steep steps, provides public access to the beach at the Mangilao Golf Club. Visitors can see a panoramic view of the Pacific Ocean along Guam’s eastern coast or a spectacular sunset.

Marbo Cave
Marbo Cave is a freshwater coastal cave. The spring was used to supply fresh water by the Japanese administration until 1944 and then by the U.S. Army until 1950. The cement foundation in front of the spring supported a large pump to bring up water from the spring.

Pagat Cave
Located on the eastern side of Guam along the coastline, Pagat Cave is located in a sinkhole at the bottom of a cliff and contains a deep freshwater pool.